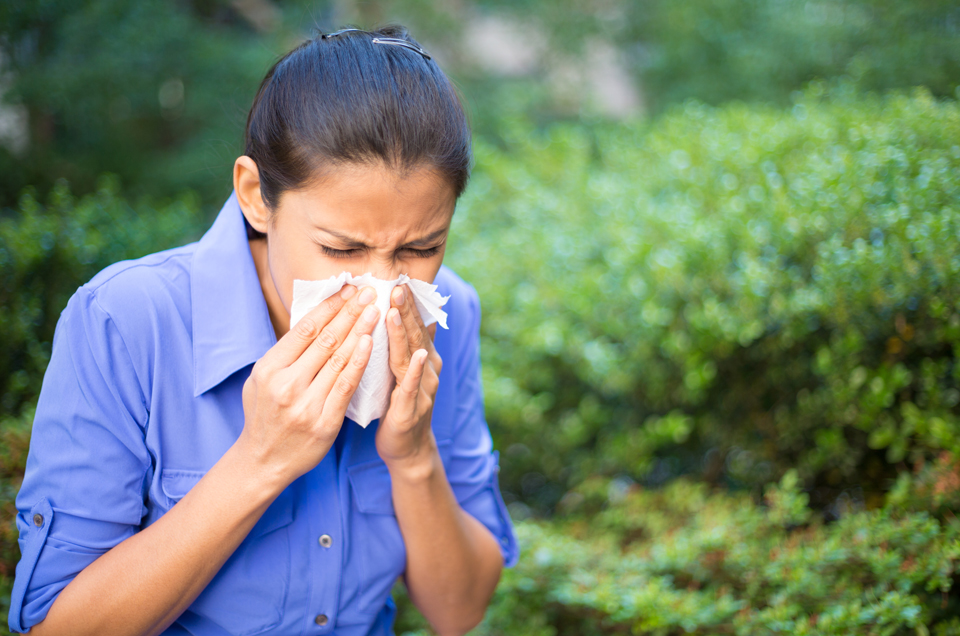 Pollen is the chief cause for seasonal allergic rhinitis in spring. Allergies are triggered when pollen grains get into a nose of a person who is allergic, sending his immune system into an overdrive and causing symptoms such as sneezing, runny nose, itchy and swollen eyes or various other symptoms of allergies. Pollen or other allergens can also trigger asthma attacks leading to difficulty in breathing, wheezing and coughing.

Allergic rhinitis according to Ayurveda:

Allergic Rhinitis or hay fever is a result of the body's over-reaction to pollen or dust. It causes an inflammatory response by the sensitive mucus membranes that line the inside of the nasal passages. While a healthy immune system is able to cope with the billions of particles and impurities that float in the air we breathe, a weakened immune system is hypersensitive to this seemingly normal invasion.

Hay fever is characterized by headache, itchy eyes and throat, runny nose with watery discharge and sneezing. Allergies are caused due to hypersensitivity of the nervous system. Ayurveda recommends the long-term boosting of your immunity system to find a permanent cure for this condition.

Some of the causes that trigger seasonal allergic rhinitis include indigestion, inhalation of smoke and dust, staying awake in the night, daytime sleeping, exposure to cold and chilly weather, increased sexual activity, not being in balance with the season, and the suppression of natural urges.

According to Ayurveda, ama (undigested toxins) and low immunity are the main cause of allergies. Ama can settle at the digestive level or in various tissues with different symptoms at each level. When improperly digested ama is carried through channels into the various tissues in the body, the resulting toxin accumulation imbalances the tissues. Ama toxicity aggravates pitta or kapha, and in each case, the symptoms may vary. In fact, you may be a kapha, pitta or vata person, but an allergy when it occurs in any constitution, can throw up various symptoms.

Ayurveda believes in balancing the three doshas present in the human body, thus treating the disease on the whole. Treatment involves clearing the sinuses and expelling phlegm, alleviating the relevant dosha and detoxification. To permanently resolve this disorder, dietary and lifestyle adjustments may be necessary in addition to the strengthening of the immune system. Panchakarma is an effective means of treating hay fever.

In Ayurveda, allergies can be treated through shodhan (cleansing) treatment in the form of nasya where the drop of medicated oil is instilled in the nostrils. Ayurvedic nasya oil is made of jivanti, devadaru, usira, sariva, sveta chanadana, daru haridra, yasti, satavari, rasna, kantakari to help relieve sinus inflammation. Such oils can be applied twice a day by hanging the head over the edge of the bed and squeezing 3-5 drops of the oil in each nostril. This helps lubricate the mucus membrane while allowing the oil to drain up in the sinus cavity. If nasya therapy is carried out effectively, kapha related toxins from the paranasal sinuses are eliminated.

Allergies can also be treated through shaman (pacification) treatment in the form of medicines where kapha pacifying herbs are used. Herbs that can pacify kapha include mulethi, vasa, pushkar mul and kantakari. Powders like palishadi churna, sitopladi churna, lakshmivilas ras tablets and vyoshadi guggulu are surefire medications to pacify kapha.

Before we start, you are forewarned, don't reach for that chilled bottled juice or carbonated beverage to cool down in summer. It will not only impair your digestion but will also harm your immunity system. Also chilled or ice-cold drinks are harmful because they disrupt digestion by dousing the jatharagni or digestive fire. Fresh fruit juices and nectars, blended and stored at room temperature, are recommended. Grape juice, water melon shakes, lassi, bel sharbat and aam panna are refreshing and healthy choices in summer. You should also drink a lot of cool pure water to replenish body moisture lost to heat during summer. Keeping your body hydrated is vital during this season.