What is the difference between Crohn's Disease and Ulcerative Colitis? 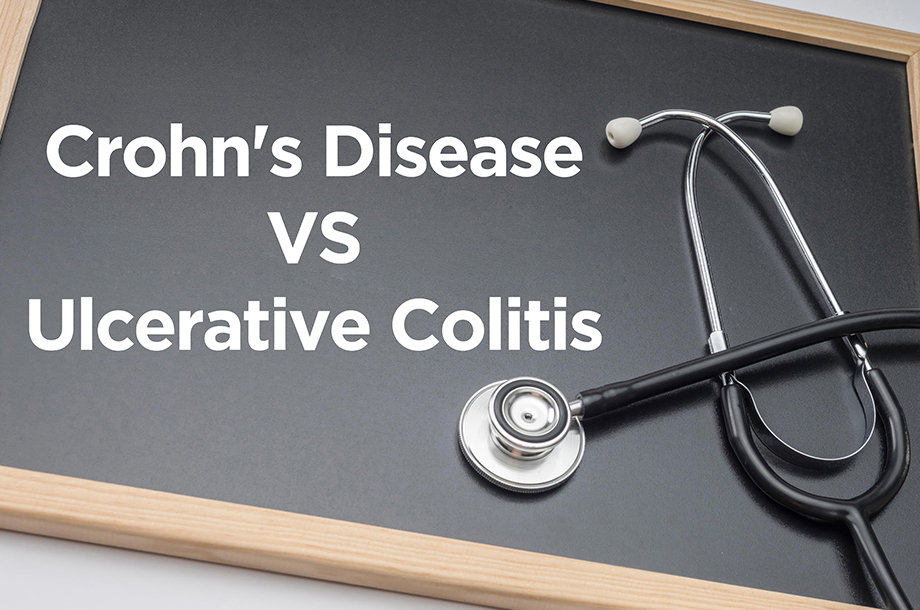 Crohn’s disease and ulcerative colitis are inflammatory bowel diseases that cause chronic inflammation and damage in the gastrointestinal (GI) tract. The GI tract is responsible for the digestion of food, absorption of nutrients, and elimination of waste. Inflammation impairs the ability of affected GI organs to function properly, leading to symptoms such as persistent diarrhea, abdominal pain, rectal bleeding, weight loss and fatigue. While ongoing inflammation in the GI tract occurs in both Crohn’s disease and ulcerative colitis, there are important differences between the two bowel diseases.

Crohn’s disease can affect any part of the GI tract, including the mouth, esophagus, stomach, small and large intestines, rectum and anus. Ulcerative colitis is limited to the large intestine (colon), usually starting from the rectum.

The inflammation in Crohn’s disease tends to occur in “patches” and may extend through the entire thickness of the bowel wall. In Ulcerative colitis, the inflammation usually begins in the innermost lining of the intestinal wall (mucosa) and is a continuous stretch within the colon.

The difference in location and extent of the inflammation leads to different outcomes and different treatments for Crohn’s disease and ulcerative colitis. However, the major symptoms of these two bowel diseases overlap. Below is the list of common symptoms that may vary from person to person -

Since the differences between the two conditions mostly revolve around the digestive system where inflammation occurs, the doctor usually asks if you have any family history of the bowel diseases and investigate the disorders by blood tests, stool samples, X-rays and endoscopy.

Both the diseases are controlled through medicines and steroids that target the body’s inflammatory responses. Reducing inflammation can reduce and eliminate many of the shared symptoms of diseases, such as pain and diarrhea. However, prolonged use of these medicines result in side effects. In some cases, when a nonsurgical approach fails to address the condition, doctors may recommend surgery. Surgery for either disease has many potential risks and will require recovery time. Crohn’s disease may eventually come back later in life even after surgery. So, is there any safe alternative to treat Crohn’s disease and ulcerative colitis?

Yes, one can take Ayurvedic treatment for both bowel diseases. Ayurveda has been treating symptoms of Crohn’s disease and ulcerative colitis for thousands of years. The ancient science understood that the symptoms resulted from an imbalance within the body and works to find the root cause of the disease. The primary goal of ulcerative colitis and Crohn's disease ayurvedic treatment is to reduce inflammation by correcting the root cause of the problem. Our doctors at Jiva work closely with the patients to understand their individual body constitution and imbalances to provide a customized treatment plan including detoxification programs, body therapies, Ayurvedic herbal formulations, diet and lifestyle advice. The treatment results vary based on the patients’ specific condition and the severity of inflammation and symptoms.