What is the treatment for Crohn's disease? 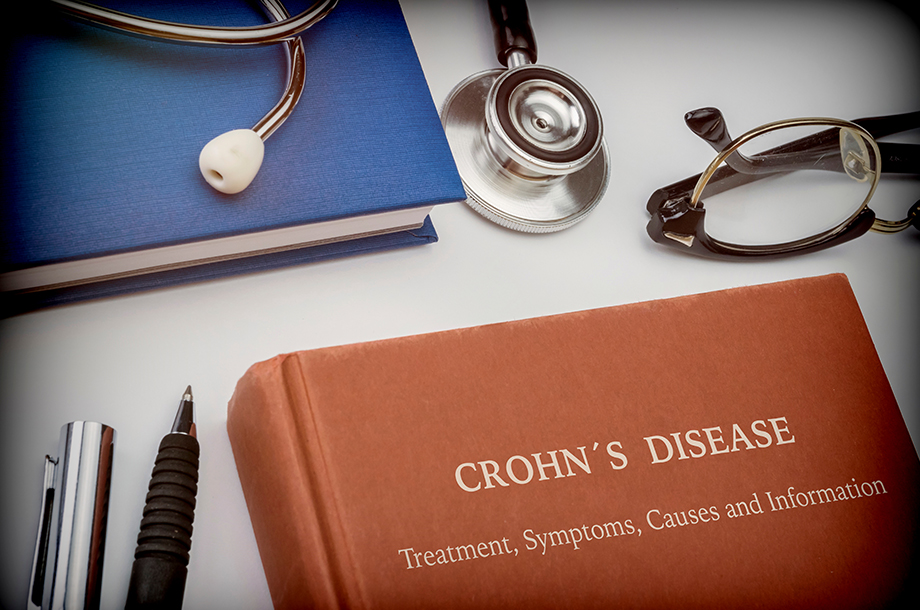 Crohn’s disease is a chronic inflammatory bowel disease. It primarily causes ulcer formation in the intestine but can affect the digestive system anywhere from the mouth to the anus. It causes a wide variety of symptoms like abdominal pain, diarrhea (blood in stool when the inflammation is severe), lack of appetite, vomiting and weight loss. It may also cause complications outside the gastrointestinal tract such as skin rashes, arthritis, and inflammation of the eyes.

Crohn’s disease seems to be caused by a combination of environmental factors and genetic predisposition. Researchers believe that in Crohn’s disease the immune system attacks bacteria, foods, and other substances that are actually harmless or beneficial. During this process, white blood cells accumulate in the lining of the intestines, producing chronic inflammation, which leads to ulcer formation in the intestines. In alternative medicine, treatment options are restricted to controlling symptoms, maintaining remission, and preventing relapse. In some cases, when a non-surgical approach fails to address the condition, doctors may recommend surgery. However, Crohn’s disease may recur even after surgery.

Ayurveda, the holistic system of medicine, places a lot of emphasis on gut health. Ayurveda particularly focuses on the significance of a healthy digestive system (or strong digestive fire known as jatharagni) for good health and wellbeing. If jatharagni is weak, it is not able to digest food adequately and therefore, the tissues will not receive proper nourishment and will inevitably become unbalanced. If the function of the digestive process is impaired or unbalanced, the person becomes unhealthy and disease is generated due to weak jatharagni that leads directly to an imbalance of dhatus (tissues), malas (wastes) and doshas (energies).

According to Ayurveda, Crohn’s disease can be compared to ‘Grahani’ disease. Grahani in Ayurveda is actually an anatomical term to describe the small intestine (specifically ileum and jejunum). Any vitiation or inflammation to this particular part by imbalanced Doshas (Vata, Pitta and Kapha), especially pitta dosha, can cause a wide variety of symptoms similar to that of Crohn’s disease, anywhere across the digestive system. The degree and nature of symptoms may vary as per the doshic predominance and involvement.

As per Ayurveda, the primary causes of Grahani disease are Mandagi (poor appetite and poor digestion), irregular or incompatible diet habits and consumption of junk food. Unhealthy diet habits (Apathya) in certain digestive disorders, especially the conditions of post diarrhea and irritable bowels, are also one of the important causes of this disease.

At Jiva Ayurveda, we provide effective treatment for Crohn’s disease based on the classical principles of Ayurveda. Our doctors have treated thousands of cases of Crohn’s disease with personalised, root-cause based approach. Crohn's disease ayurvedic treatment involves a variety of lifestyle, diet and stress-relieving suggestions to identify and reduce the triggers of the disease and associated symptoms.

We offer an individualized treatment program including Ayurvedic herbal formulations, diet and lifestyle advice to each individual. In more severe and chronic cases, detoxification programs and body therapies are selectively done along with these. If the patient is already on allopathic treatment, Ayurveda treatment can be clubbed initially and gradually allopathic medicines can be tapered down. The results for Crohn’s disease are usually good with the Ayurvedic line of treatment. Cases reported earlier or in the initial stages tend to respond quickly than the chronic ones. If the patient can stick to all the guidelines as advised, even a complete cure can be achieved. Therefore, it is advised to seek early consultation with the Ayurvedic doctor for Crohn’s disease treatment.